I was going to write a piece on the consistent distortion of the word "values," but the following caught my eye from Fits News: 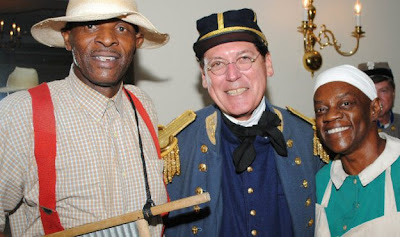 The National Federation of Republican Women (NFRW) held its annual fall Board of Directors meeting in Charleston, S.C. last weekend – a decision the organization is likely regretting after several controversial pictures from one of the meeting’s sponsored events began surfacing on the internet.

One of the pictures shows S.C. Senate President Glenn McConnell - who FITS readers will recall enjoys dressing up as a Confederate General – posing in his Rebel garb with a pair of African-Americans dressed in, um, “antebellum” attire.

The event in question – dubbed “The Southern Experience” – was held last Friday evening at the Country Club of Charleston. Hosted by the South Carolina Federation of Republican Women, it was included on the national conference’s official itinerary.

In addition to McConnell, S.C. Gov. Mark Sanford attended (and spoke at) the event – although it was not listed on his weekly public schedule. S.C. Republican Attorney General nominee Alan Wilson also attended.

Fits News has more pictures posted on its site.

Okay accuse me of political correctness all you want, but I'd like to hear who exactly these two black folks were "portraying" during that experience. How about a "real experience" and tying the brother to a tree and whipping his back or . . . modesty precludes me from saying what should be done to the "sista'" but you get the picture.

I don't think its necessarily a good thing to celebrate some mess like this. But in a state where the Confederate flag hangs at the State House and where there also resides a statue devoted to an "unashamed" racist (Ben "Pitchfork" Tillman) who proudly bragged about using violence to keep African-Americans disenfranchised, what else can you expect?

Posted by BlackTsunami at 3:34 PM

I saw this at both Pam's House Blend and here before I went over to Fitt's... and I'm just.. infuriated. I'm so angry I can't believe it.
Like. I'm sorry, but where the hell does anyone get off thinking up a party like that? I just.. ugh..
adn yeah, your questions are thought provoking. I'm curious.

WOW i can't be those black gentlemen dressed up like that. i mean i know people lived like that in that time period but to promote a political figure with such a terrible time in our nations history is a little odd don't you think?!