Wanna watch a bigot melt down? Ask him a simple question about marriage equality

This is hilarious. A friend of mine on Facebook asked a simple question about giving a good reason why the gay community should be denied equality. And check out the answer. I really don't understand the answer because I don't think the question was all that difficult: 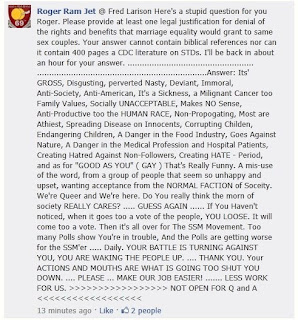 This "piece of work obviously forgot about us ripping tags from mattresses, "squeezing the Charmin," and calling random people to spoil the plots of videos they just rented.

But make no mistake about it - the person voicing this "interesting opinion" is the type of person whom Brian Brown, Maggie Gallagher, and the rest of the lovelies at the National Organization for Marriage or Tony Perkins and his people at Family Research Council hope to attract when they spin their lies about homosexuality and pedophilia or homosexuality being a "bad health risk."

It  has never been, nor will it ever be about truth. It's more about exploiting ignorance, fear, and religious beliefs. At times, it's sad.

But right now, it's just so damn hilarious.

Posted by BlackTsunami at 4:52 AM

I wonder if that fool was taught to proofread his stuff (not the word I wanted to use, but I don't know if you allow profanity on your blog :-)) before he posts it? Makes me fear for the future of our nation's young people, especially if they happen to end up with an English teacher like him.

I grew up in a small town in the South, I was raised Southern Baptist, and I never knew any gay people growing up. So, yes, you could describe me as homophobic. But then I did grow up, I met some gays, and I realized that hey! Y'all are really no different from straights, except for the same-sex attraction. I believe that God, for whatever reason, made you the way you are, and that's good enough for me. I have no issue with ssm. I just wish we (fundamentalist Christians and gays and their allies) could "agree to disagree" on this issue. SSM won't damage "traditional marriage" one bit. Why not let two people who love each other get married?

What polls is he looking at? Survey after Survey shows a trend toward support for equality, not away from it.

Hi, if any of you are on Facebook, you can report this page for faking another page (Roger Ramjet). I don't care if idiots speak, but I know the animators at Pantomime Pictures (a side-project for people at Hanna Barbera in North Hollywood) who did this cartoon in the mid '60s, and I guarantee that a few of them are gay and all of them would be very irritated to see their character used like this

Bitchy, bitchy bitchy! Someone need to tell this cry baby that if he's personally disgusted, then it's a personal problem with gay people.