The ramblings of a poor, obsessed homophobe for your enjoyment and pity 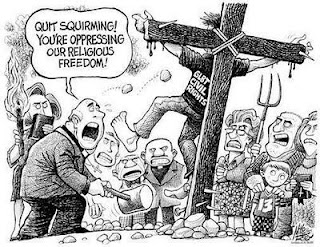 Far be it from me to put someone in a spotlight as a subject of derision to be made fun of, but this child deserves it.

He kept sending me messages on the Signorile video until I blocked him, so he took the time to send me this long rambling message. This is sad homophobia defined.

Just read and understand the ignorant mindset behind some people's reasonings of why they treat us lgbtqs like freaks:

.. you blocked my responses to your post Alvin in YouTube, but I am not surprised, people like you want to block the Truth, to silence it like Chris Mathews even said in his video.

No matter, here it is anyway...

Do you know what it will take for a t-r-u-l-y better world to happen? Brutal honesty, and then Responsible Behavior from everyone! It will take for every single person to look at their lives, identify what they are doing wrong, and correct it, no excuses, ...none!

And what is correct and what is wrong behavior? Easy, look at the outcomes of the action, and then it becomes clear as daylight. And we all have flaws, things we need to work on, we assume too much, we care too much about our own selves and not enough for others, we pursue material things when we should we working more on our own selves, we consume too much, we rape the land too much, we neglect one another, we indulge on physical pleasures too much, when we should be more spiritual and protect and not abuse our bodies, and on and on.

And of course, out of those many flawed lives, many negative "side-effects" blossom, like children raised in neglectful environmental/dysfunctional/abusive environments, hell... some of the people having children are themselves children! Many children (like the case of homosexuals) are atrophied by those bad environments, and make the incorrect Gender Identification, or what is called Gender Identity Disorder in Philology, which later blossoms into full homosexuality. Remember, there is no “gay gene”.

My problem with people like you is that the dysfunction you have you seem to try justify it, to excuse it, when in reality if you look at it... A-L-L of it, it is clearly a bad behavior. High disease rates, high mortality rates, high cost to the individual and society, unstable relationships, physical damage to the body due to the erroneous sexual acts, and on and on... and on! It is all here: (Editor's note - the poor child supplied his page but I refuse to give it out. I've seen it and it's the same cherry-picked or discredited junk science we have seen repeatedly but ths time grouped together in one sad package. The young man obviously took so much work in gathering together his statistics that he didn't read them thoroughly or derive where they came from. A little note, my friend. There is no such thing as "gay bowel syndrome." Dumb ass.)

You tell the doctors that have to deal with the many diseases being spread in the population more and more by highly sexually promiscuous homosexuals, since many of homosexuals happen to be asymptomatic, carrying disease most are not even aware of, but are spreading it on to others thanks to your reckless sexual behaviors that homosexuality is good... go on and tell them...

You go on and tell the taxpayer that the health care cost going higher and higher every year due to more and more homosexuals (and other liberals as well) doing reckless sexual behaviors, causing more people to get sick with preventable disease it is a good thing... you go ahead... you tell them (just look at the HIV cost numbers in Canada in that webpage)...go ahead tell them...

Wrongs are wrong, no matter how much you make like doing it, no matter how much you may "feel" you have no choice but to do it! The same thing has happen to other groups like the alcoholics and smokers, people that would say they had "no control over their actions"... "they couldn't help it"... And just because others may be doing other things wrong still does not make a wrong right... that is the mentality of a child.

In the end, humanity will never achieve a better world as long as groups like the homosexuals stay in denial and keep pushing their dysfunction upon society as an "OK" thing", as a "harmless thing", ignoring and even blocking the data again and again that point and says, hey you have a problem...

I leave you with this thought by the great Greek philosopher Socrates (469–399 B.C.E.) that said that the biggest endeavor for a person in life is to “TRULY know thyself” or what he called, to have an Analyzed Life, he wrote: "...The unexamined life is not worth living..."


And please note that I have refuted his claims in a myriad of past posts, including this one which addresses in particularly the lies of "shortened mortality rate," the "unstable relationships," and the "promiscuity argument."

My prime objective for posting this child's pathetic ramble is for you see the folks who have dived  headfirst into the pool of lies pushed by the religious right.

But with this posting comes a caveat. Not everyone believes this mess and the wilder these folks get, the more mainstream we are becoming.

So in essence, you are witnessing death throes of archaic ignorance.

But I'm feeling a little guilty about it. Who knew watching the death throes of archaic ignorance would be so much fun to watch?

One more thing that someone just pointed out to me. What's the definition of stupid irony? Using a quote from a gay man (Socrates) to end a ramble criticizing gays.

Posted by BlackTsunami at 11:01 AM

This sad, ignorant fool is clearly regurgitating the lies he has been told. He has clearly never done any research of his own or learned how to examine the facts for himself (I'm assuming it's a him). I can make a good guess what sources and FB pages he considers "factual". Perhaps he should start by examining his own life, and remove the plank from his own eye before trying to remove the speck from another's.

I don't blame you for blocking him. It's just not fair to have a battle of wits with an unarmed person, and he's obviously of sub-par intelligence.

I always giggle when people use the STD argument against homosexuality. When talking about HIV/AIDS, accidental pregnancy, and several other problems sex causes, LESBIANS are the lowest risk population. So, in using that argument, they are unwittingly saying that we should ALL be lesbians. Yay!

Oh good grief, this twit is the epitome of ignorance, stupidity and pure nastiness! I don't blame you for blocking him at all... Real life is filled with drama as it is, who needs to put up with crap like that from someone they haven't met in real life?

Hold your head up high, be proud of who you are and never let "people" like that narrow minded idiot get you down! Blessings!

Perhaps your dear writer, since it is CLEARLY the only sexuality found in nature, can please point out for humanity the "heterosexual gene." It must be well documented in Philology,

The funniest thing to me is all the stuff he says that I agree with. All that stuff he said about personal responsibility, minding our own business and being true to ourselves. Yet, when we 'evil' homosexuals try to do just that, he feels he has to speak up. What a hypocrite.

I've gained quite the reputation with the Christian dipshits over time.

From my take, I enjoy toying with them. Like you I am armed with not only the information required, but I have the foundational religious training that allows me to debunk their claims with ease.

So never give up. Keep shoving it right back in their face.

How would he explain someone like me? I'm a lesbian, volunteer, work in home care, am going to school for a psych degree. Oh, and I haven't been with a woman outside of a monogamous relationship since I was in my early 20s when I came out, and haven't had sex in over 2 years, not my choice.

I'm the complete antithesis of what he believes.

He says "look at the outcomes of the action". Yes, well the actions of loving someone hopefully will mean they'll love you back and you'll live a happy life together. Sadly he's taken as truth all the filth spread by NOM and the likes of them.

Jesus said in the Bible that it's not what goes into your mouth that defiles you, it's what comes out of it... Methinks some people (many gays, many straights) will eventually have their faces in their hands, crying in shame of what came out of their mouths while they were on this earth.

This battle between neighbours has caused so many to say things they will regret one distant day. Even myself. It's the human condition, we are all flawed and it shows in so many ways. Maybe this battle will subside one day, only to be replaced with something else. It's a never ending cycle.

And yet these people preemptively disallow comments AND ratings on their Youtube videos. Hypocrites, the lot of them.

Alvin, I admire you and truthspew above for your patience in dealing with such stupid and ignorant people. For most of us, it would be dispiriting, but I sense that for you it is energizing. Thank you for all you do. Thanks even to the ignorant bigots for inspiring you to do such excellent work!

So, we're one of the groups responsible for keeping humanity from a better world? Really? I'd be angry if his ignorance weren't so tragic.

Ummm... Please correct me if I am wrong, but since he quoted Socrates.... Wasn't Socrates bi-sexual and a known pederast? If so, someone might want to point that out to this bigoted fool.... just say'n....