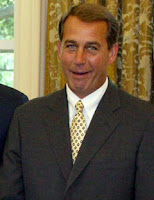 Republicans in Congress are starting to cheese me off. They want to cut monies on Social Security and Medicaid, while at the same time doing the following, via Think Progress:

It has come to light that House Administration Committee Chairman Dan Lungren (R-CA) secretly approved a $500,000 increase to a contract with a private law firm to defend the unconstitutional Defense of Marriage Act (DOMA) in federal court. While the increase was approved in September, neither the public nor the Democratic House minority was informed until this week, Roll Call reports. The contract now authorizes Bancroft PLLC and former Solicitor General Paul Clement (R) to spend up to $2 million in to defend DOMA — the second increase to what was originally a $1 million cap. The U.S. Department of Justice stopped defending the 1996 law in February 2011 after determining the law to be in conflict with the U.S. Constitution.


Two million dollars in an attempt to deny gays the right to marry. And if that's enough to get you angry, remember the fact that Clement, their lawyer, is using faulty research and tactics in his case. I wrote about this last year but let's recap:


If this isn't enough to get you angry at Boehner and company, then you need to check your pulse. You may not have one.
Posted by BlackTsunami at 3:14 PM

Exactly why the religious nutcases should never, ever get into any form of office including school boards, county office, state or national office. They use their own religious bias to make policy instead of credible scientific evidence. If we allow these people to continue, someone is gonna get dead.

Why I understand the stupidity of these people in the Republican party, stating that religious people shouldn't be in the Govt is probably the single dumbest thing I have heard because most of the country is religious in some way and I don't see any scientific proof that Atheist people would have a better head on their shoulders when it comes to politics. Regardless of religious belief or not we need to attack these people by their actions not their faith.