Anti-gay groups will lie like hell to stop ENDA 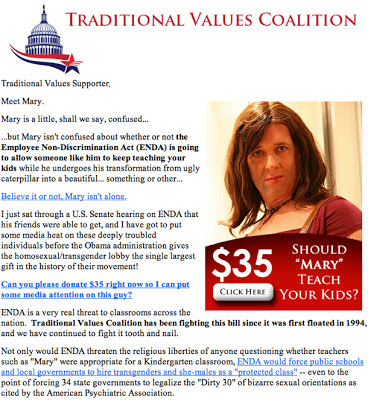 On July 10, the Senate Health, Education, Labor and Pensions Committee will be voting on the Employment Non-Discrimination Act (ENDA). This means that the lgbt community and our allies had better get our asses in gear because you just KNOW the opposition are getting ready to push the standard lies.

When things like this happen, one thing which we are vitally missing is accurate information to put out there, bombard folks with, or to overcome all of the lies. And one thing we do need to combat with as much vigor as raising hell at a Cher concert are the lies.

According to Media Matters, here are the top six lies that anti-gay groups spread about ENDA. I've condensed the information but click on the links to read the lies in full as well as information to refute the distortions:


For those who need a basic definition of what ENDA will do, the following is it:

ENDA would bar companies from factoring sexual orientation or gender identity into employment decisions. Employers are already prohibited by federal law from discriminating over race, religion, age, gender or disability. The proposal exempts businesses with fewer than 15 employees as well as religious organizations.

Posted by BlackTsunami at 4:58 AM

the military already prohibits LGBT discrimination, so why the hell hasn't this happened with the rest of the country already? -A concerned bisexual Navy Sailor.

The military does not prohibit discrimination based on sexual orientation. It still discriminates based on gender identity.

Interesting that they zero in on the transgender community. I guess it doesn't sell to present gay people as abominations anymore.

BTW, I should mention I have two good friends who transitioned. To me it's no big deal.

You added one letter too many. DADT's repeal only applied to LBGs. We were left behind, and like good little allies we didn't utter a peep of protest about being abandoned, and the same will haopen again once we become the slightest obstacle to ENDA's passage.