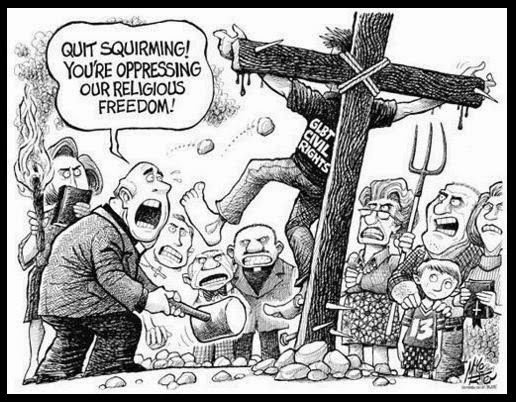 Rather than a long post today, I have a simple request.

Most like Arizona Gov. Jan Brewer will veto that awful anti-gay segregation bill. It would be an awesome victory for us but the war over lgbt equality isn't over yet. Knowing anti-gay groups, they will view this as a minor setback and while we are celebrating, they will planning new mischief. Today, I read various facebook messages from my fellow lgbts and they got me depressed. The messages ranged from "woe is us. what are we going to do" to "let's get rid of those bigots."

They were too simplistic and depressing. Worst of all, none encouraged intelligent pushback. And just what is that intelligent pushback? It's acknowledging that we need to change this scenario because it plays over and over again. The right comes at us with something and we are caught off-guard because we have failed to study them and their methods.  We don't know who many of them are, their ways of lying, their phraseology, or their semantics. All we know is that they are "bigots."

We simply must be more nuanced and aggressive in how we fight the anti-gay right. We need not wait for them to attack our equality but put them on the defensive for a change. We need stop allowing them to question our ability to love and live in peace. We should be making them explain why, if they are supposed to standing up for traditional morality, do they stoop to methods which would make Satan blush.

Nothing fancy. No complex words that would leave members of our community scratching their heads in confusion. No over intellectual terminology. Just simple and straight ahead attacks on the veracity of these so-called pro-morality, pro-family groups.

And with that in mind, the following link goes to the direct adobe acrobat copy of my booklet, How They See Us: Unmasking the Religious Right War on Gay America.  It's a short but complete assessment of anti-gay groups, their lies, and their propaganda. It's free so you either read it online for print out a copy.

I've emphasized the following point till I'm blue in the face and you are all tired of hearing it and I'm going to emphasize it until it is fully taken in, dammit. The lgbt community has to stop acting like a dog constantly chasing its tail.

We get into the situations on being on the defensive with the religious right because we are slack. We wait until they get our backs against the wall before we react. I'm tired of it.  You should be tired of it. So do something about it. Educate yourself and others about these people and groups.

This is a war, yes. But it is a war of rhetoric, semantics, and position. And I for one am tired of the lgbt community entering into battles willingly unarmed.
Posted by BlackTsunami at 4:25 PM

I wasn't surprised, they've been touting the damned religious freedom BS for years. That's why I've said so often there is no religious freedom. If this law passes somewhere and goes into effect, and it likely will somewhere, I garontee the first time a non christian states a sincearly held belief that hurts a christian person they'll find a way to say it doesn't count.

You may consider looking at the comments of the JoeMyGod blog. Maybe they're a different crowd because people who read JoeMyGod are probably more informed than the average LGBT or Ally Facebook user, but there are some fairly intelligent comments over there. It seems to me that the biggest step that we need to take as we move forward in light of the AZ bill which I am really hoping is vetoed (looks like it will be in light of the conservative political dogpile on Jan Brewer) is to push ENDA. These sorts of bills show clear animus towards LGBT people, show concerted efforts to push legislation which permits discrimination; this shows the clear need for ENDA, contrary to what Boehner has prognosticated would be "frivolous lawsuits" resulting from it. As these bills flounder, we need to make a correlation between the public outcry against this kind of market discrimination and the injustice of employer discrimination.