Anti-lgbt hate group extends to next generation of vile leadership

When it comes to the anti-lgbt hate group the American Family Association and its leaders, Donald Wildmon and his son Tim Wildmon, it's sadly easy to see how lying about the lgbt community becomes a family business.

Unfortunately, that extends to a new generation, Walker Wildmon, the son of Tim. He sent the following nonsense via twitter: 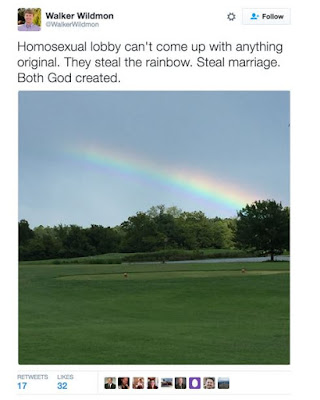 The Wildmons prove that those of us dedicated to lgbt equality and safety must not slack off in our fight. We would like to think that the day will come when hypocrites and homophobes like this family aren't attempting to defame us, but I doubt there will be a day when we are completely free from lies told in the name of God trumpeted by those who have no shame in telling them.

But that doesn't mean we should stop fighting.  Nor does it mean we should yield and allow them to steal the narrative. The rainbow belongs to us because we, just like heterosexuals, are as God has made us.

And marriage belongs to us because we earned it.

And little Mr. Wildmon nor anyone else can take either away from us.

Hat tip to  Hemant Mehta
Posted by BlackTsunami at 3:21 PM

To steal implies taking from others so they can't have it. I didn't know the rainbow wasn't allowed anywhere other than at gay things. And I didn't know that now only gays were allowed to marry.