Parents in the East Penn School District are up in arms about being told they can't see videos that their children were shown without their permission. Parental rights are being ignored here. We need Christian men & women running for school boards. https://t.co/VJYYIQmQnY
— Franklin Graham (@Franklin_Graham) June 30, 2018 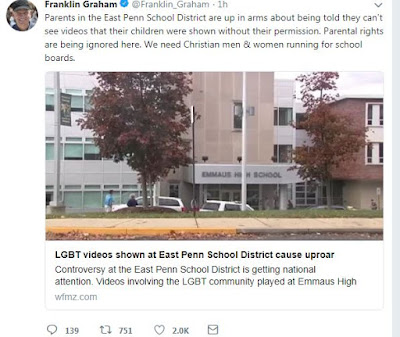 Graham is so typical of the self-righteous homophobia which permeates conservative  right-wing evangelical circles. He sees the words "LGBT"  and  automatically thinks of sex or "recruitment." Apparently to Graham, adherence to what he thinks is God's word is more important than reading comprehension.  If he had taken the time to read the article he retweeted, he would have seen that the videos in question were about bullying:

Videos played by the Gay-Straight Alliance Club during Emmaus High School's morning announcements back in April are now in the spotlight.

At a school board meeting earlier this month several parents, community members and the president of the American Family Association of Pennsylvania voiced their concerns, saying the entire student body was exposed to homosexual and transgender ideals.

. . . Emmaus High School student Aidan Levinson says the idea that the videos forced the gay lifestyle onto heterosexual students couldn't be further from the truth.

"It was more of an anti-bullying effort more than anything else," Levinson said. Levinson is not a member of the LGBTQ community, but spoke at the school board meeting Monday -- expressing his support for showing the videos.

. . .The superintendent of the East Penn School District says he was not aware of the videos before they played but has seen them since.

In a statement to 69 News he says, "I did view the videos at a later date and found them to be appropriate and related to the mission of eliminating bullying and promoting sensitivity and understanding of our LGBT population."


First of all, nothing in the article says that parents aren't allowed to see the videos. Aside from Graham's ignorance, this incident gives a view of the game which is played to stigmatize our community. A so-called pro-family group brands anything having to do with the LGBTQ community as scandalous, no matter how non-threatening it may be and then spooks parents into raising a fuss about it. It creates a situation which implies that we are attempting to "recruit" children behind the backs of their parents. The very idea is inane enough, but it gets downright insulting when one factors in that these concerned parents don't give a damn  that LGBTQ students AND same-sex household with children exist and should have a say in the matter as much as them.

But speaking of Graham, I tend to think that him reading the article wouldn't have changed his mind about the situation. In 2015, he praised Russian president Vladimir Putin for how he was persecuting the gay community there, claiming that Putin was keeping children safe. So perhaps the idea that Graham is angry that the school district is attempting to keep LGBTQ kids safe from bullying isn't that farfetched to contemplate.

Posted by BlackTsunami at 7:59 AM

Anything portraying the LGBTQ community that is less than condemnatory is "recruitment." Recruitment is good for scaring people. That's how Graham gains influence.

Graham is as much a grifter as any of his fellow-travelers: he's in it for power and influence, and couldn't care less about the teaching of Jesus.