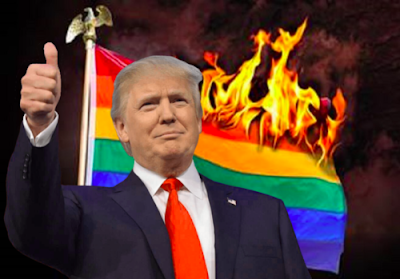 The Trump Administration just announced what I call a fast con using the LGBTQ community:

The Trump administration is reportedly launching a campaign to decriminalize homosexuality around the world. According to NBC News, Iran is one of the primary targets of the effort, drawing attention to President Donald Trump’s history of conflating support for the LGBTQ community with Islamophobic messaging.

The catalyst for the decision appears to have been Iran’s hanging of a gay man in January. Iran has long been one of Trump’s biggest international foes, and the president has repeatedly threatened the nation against pushing back on the administration’s decision to reimpose sanctions that were rolled back under the Iran nuclear deal. Leading the new campaign is Richard Grenell, U.S. ambassador to Germany. Grenell, an openly gay man and ultra-conservative, lashed out after the hanging, calling it “a wake-up call for anyone who supports basic human rights.”

. . . On Twitter, the ambassador has posted dozens of tweets decrying “radical Islam,” a term often used to demonize all of Islam as being responsible for terrorism. He has also implied that Islam categorically rejects homosexuality, even though a growing majority of U.S. Muslims believe society should accept homosexuality. (Far fewer white evangelical Christians agree with that statement, however Grenell has claimed LGBTQ activists are “intolerant” towards Christians for opposing exemptions that would allow Christians to discriminate against LGBTQ people.)


Forgive the vulgarity of my candor but just who the fuck does the Trump Administration think it's kidding?

I appreciate any call to stop the criminalization of homosexuality but I resent the LGBTQ community being used as a wedge issue against Islam.

And especially coming from this Administration.

We are talking about the same Administration which, aside from declaring implied war on LGBTQ Americans, has affiliated itself with activists and groups who have for years lied, cited junk science, and relied on cherry-picked science to falsely accuse the LGBTQ community of everything from stuffing gerbils up our butts to "recruiting children."

Isn't this the same Administration whose former attorney general (Jeff Sessions) coddled, consulted with, and defended a group (Alliance Defending Freedom) which itself once defended the criminalization of homosexuality and the sterilization of trans people? Heck, a former employee of ADF, Kerri Kupec,  now works in a senior role in the Justice Department.

Then there is that group handing out "mulligans" to Trump for his bad behavior, the Family Research Council. Isn't that the same group which defended Uganda's infamous 'kill the gays' bill? Isn't this the same group who currently employs a man who said gays should be exported out of the United States:


And then there's Trump's vice president, Mike Pence. This is a man who created a political career based upon attacking and demonizing the LGBTQ community.  This includes lying about an anti-LGBTQ bill when he was Indiana's governor.  And then when he appeared on This Week to defend the bill, he refused to say if he opposed anti-LGBTQ discrimination even after being asked eight times:

And I haven't even included his wife's affinity for anti-LGBTQ schools.

The LGBTQ community is supposed to suddenly believe that this Administration gives a crap about LGBTQs being executed and jailed in foreign countries?  Don't even start condemning countries who hang members of the LGBTQ community while actively creating conditions and policies which serve to make us want to hang ourselves.


photo taken from LGBTQNation
Posted by BlackTsunami at 3:48 PM

It is pretty clear this is just a new tactic in the Republican Administration's war mongering against Iran. And even that is as much about Iran as it is about the man responsible for helping build an all-too-brief peace agreement with Iran (i.e. Trump's predecessor, President Obama, the black man who dared to be President). I remember Trump on the campaign trail was happy to waive the rainbow flag, as long as he was talking about protecting LGBTQI+ individuals from "Islamic extremists." This is totally in keeping, and aligns with some of his biggest goals: Attacking Muslims, starting a war, and undermining the legacy of President Obama.