A lot of folks - including yours truly - remain floored over Monday's Supreme Court ruling declaring LGBTQ people protected under federal employment discrimination laws.  The victory was unexpected. Of course the thing not to be unexpected were the roars of anguish and rage from conservatives and the religious right. It's what they always do whenever we get a huge victory. One conservative gripe, from right-wing activist Carrie Severino, caught my attention: 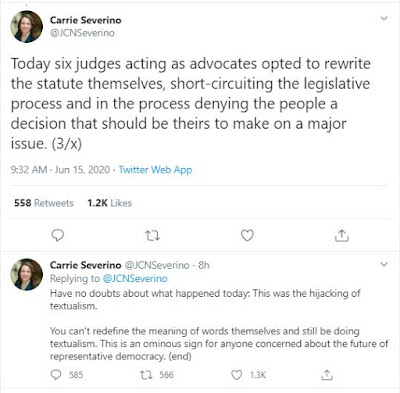 Severino is the head of the Judicial Crisis Network, a right-wing group which spends a considerable amount of dark money to get conservative judges on the bench. According to Jeremy Stahl of The Slate, the Judicial Crisis Network spent $10 million in the 2018 fight to get SCOTUS justice Brett Kavanaugh confirmed. The year before, JCN spent the same amount in the fight to get SCOTUS justice Neil Gorsuch confirmed. 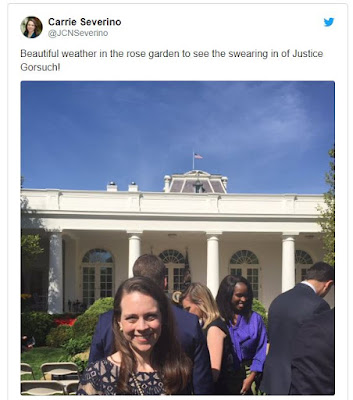 At the time, Mark Joseph Stern of The Slate said:


Severino’s presence at Monday’s ceremony serves as a startling reminder that Gorsuch’s path to the Supreme Court was facilitated by dark money. The JCN is kept afloat by one donor, the Wellspring Committee, which is in turn funded primarily by one single anonymous donor. Wellspring is little more than a dark-money conduit—but as a “social welfare” 501(c)(4) group, it is not required to disclose its donors. Ann Corkery, a Koch-affiliated conservative fundraiser, runs Wellspring; her husband, Neil Corkery, serves as JCN’s treasurer. For years, Wellspring has poured money into JCN, which spends the cash promoting conservatives in both state Supreme Court elections and federal confirmation battles.

The JCN became quite adept at buying state Supreme Court seats, mastering the art of the eleventh-hour smear campaign. But blocking President Barack Obama nominee Merrick Garland—and helping Gorsuch seize the seat instead—was its boldest gambit yet. The JCN began peddling offensive falsehoods about Obama’s shortlisters before the president even settled on Garland. Severino herself then contributed to the mendacious assault on Garland’s reputation, aided by National Review, which happily published her paid opinions. Meanwhile, the JCN ran ads attacking senators who were willing to hold hearings for Garland. It ran up a tab of around $7 million. Most of that money came from Wellspring.


And one more thing about Severino. She happens to be the wife of Roger Severino, a former employee of several anti-LGBTQ groups and now a Trump appointee at the Department of Health and Human Services. Since being appointed, Severino has been pushing regulations to the detriment of LGBTQ people, including a recent one which would eliminate healthcare protections for LGBTQ people.  Last year, I wrote about Roger and Carrie Severino, pointing out that while he is pushing anti-LGBTQ actions, she is working - with the help of a tremendous amount of dark money - to get justices appointed who would probably uphold those actions.

So why is all of this important, particularly the fact that Carrie Severino's group - the Judicial Crisis Network- spent $10 million in dark money to get Gorsuch on SCOTUS? Because Gorsuch was one of the six justices who ruled for the LGBTQ community. And not only that, he was the one who wrote the majority opinion in the case.

To say that Severino and other conservatives are angry over this would be an understatement. They are practically breathing fire. And Severino is the object of much derision now as some on our side are savoring her embarrassment. Her group spent $10 million to get Gorsuch confirmed in hopes that he would be their type of justice. In many cases, he has been. But in this particular case, he "deserted his programming."

Now none of this is meant to paint Gorsuch as an ally. He's not. But it's nice to point out that no amount of money thrown at an issue can overcome the unbending simplicity of truth and fairness.
Posted by BlackTsunami at 4:47 PM